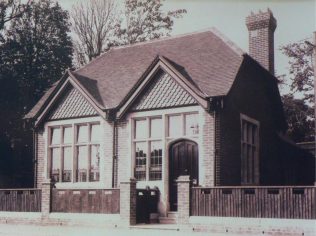 During the nineteenth century, residents of Milford used banking houses in Lymington.

However, with the proposed major development in the 1890s of select residences along Hordle Cliff, the need for commercial properties to cater for the material needs of the new elite saw the building of Milford Terrace, opposite what is now The Smugglers Inn.

Here, at Number 2 – now Lymington Cat & Kitten Rescue Charity Shop – the Wilts and Dorset Bank opened its office in 1899. Opening hours were from 10 am to 2 pm, but only on Tuesdays and Fridays. In 1914 the Wilts and Dorset was amalgamated into Lloyds Bank, moving to 8 High Street, which is now The Bay Trees. As was very often the case, the manager lived over the business.

The bank moved again in 1928, across the road to purpose built premises at Number 5 High Street. This is now the home of the Little Wrens at Milford nursery, but the building is still known as The Old Bank House.  Lloyds remained at this address until closing in 1998.

In the meantime, to allow for the increasing village population, the Midland Bank opened an office at 29 High Street – now Foot in the Door – in 1925. This, too, moved to purpose built premises, on Church Hill, a decade later. It outlasted Lloyds, but, in the face of considerable local opposition, closed its doors for the last time in 2011, leaving Milford residents and traders to rely once again on banks in Lymington.