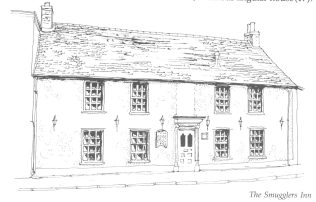 The Crown Inn at Milford-on-Sea – now The Smugglers Inn – was once used as a coroner’s court for a sad and bizarre case of the death of a baby.

The coroner, Mr Druitt, sat with a jury to determine the cause of death of the baby boy who had been discovered in a box. The mother was a single woman, Annie Pring, who had complained of feeling unwell on a Monday evening and kept to her bed until the following Thursday. Her landlady then found her looking ‘dreadfully thin and ill’, and called the police.

A PC Ward searched the box, and  found the body of a male child under a quantity of clothes wrapped in a red petticoat and white apron. There were no signs of violence.

The Coroner appears to have been sympathetic to the plight of the unfortunate mother, and said that he did not think the jury would have any difficulty in saying that it was really a case of natural death, or could be called accidental death. The jury returned a verdict that the child died from syncope, following suffocation and exhaustion from loss of blood, due to want of attention at birth.