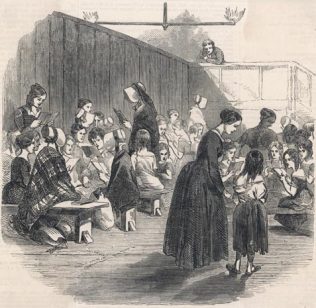 In 1730, the Vicar proposed that the income from one of Milford’s Charities, the Penny Charity, should be used to maintain a school for poor children which would employ a Curate.

This caused much opposition in the community which saw it as a way of subsidising a Curate. The Vicar was unsuccessful in the subsequent lawsuit. Evidence in court revealed that in Milford “the inhabitants were generally so illiterate that many, who had good estates and are in good circumstances in the world, cannot write their names.”

At the turn of the 18th Century efforts were made to supplement the efforts of the Poor House with schemes such as that run by Mrs D’Oyly at Milford with 62 pupils aged 4 – 12. Another school (“the second day school for the young villagers ever known in England”) was maintained by Admiral Cornwallis for 40 pupils, while contributions from the Baptist congregation supported a school of 30 children.

A parish school was established in 1818 and in 1841 a National School was built in the High Street. In 1851, Theresa Cornwallis West, Mrs Whitby’s daughter, gave the present site on Lymington Road to the Vicar and Churchwardens to build a school. The building was completed in 1852. From 163 pupils in Milford in 1835, Milford-on-Sea Primary School now has 340 pupils.

Over the intervening period other educational establishments have appeared and disappeared in Milford.