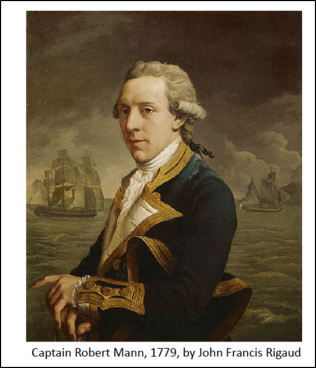 Robert Man was one of the three Milford admirals who fought the French during the Revolutionary and Napoleonic Wars, being the first to move there in 1789. He was a friend of Admiral Cornwallis and an active member of Milford church and society.

As a Lord Commissioner of the Admiralty from 1797 to 1801, he was one of the seven men who directed naval operations in the war. He had served under Cornwallis and commanded Nelson in battle, Nelson holding him in high regard.

Two problems have beset his memory. The first is that there was another Admiral Robert Man, together with two Captains of that name, during the eighteenth century. All too often, naval historians have confused them. Equally, none have yet been able to determine whether these four men were related to each other.

The second is an ill-considered remark by the editor of Nelson’s correspondence in the 1840s which cast Man’s reputation in a poor light.

All that has now changed as a result of ground-breaking research by two members of the Society, determining both the family genealogy and also restoring his reputation to the same high level as during his lifetime.

Man is buried at All Saints, with just a modest stone to mark the spot in keeping with his own wishes.

Barry Jolly, ‘A Good Man in Every Sense of the Word: The reputation of
Admiral Robert Man’, The Mariner’s Mirror, 104:2, The Society for Nautical Research 2018