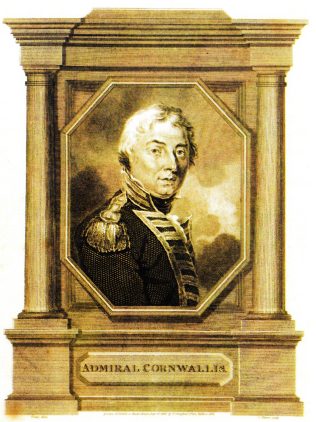 Admiral Sir William Cornwallis was one of Milford’s most distinguished residents.

As Commander-in-Chief of the Channel Fleet in the early years of the nineteenth century, it was his blockade of the French fleet at Brest and other ports that frustrated Napoleon’s plans to invade England. This action, in the face of major logistical and strategic difficulties and through two winters of unusually severe weather even for the seas off the coasts of Brittany, secured his reputation as one of the greatest admirals of the Royal Navy, but he was already a distinguished admiral, respected by his fellow officers, loved by his men, and revered by Nelson.

Indeed, Nelson’s own tribute to Cornwallis is revealing:

“I never, never shall forget that to you I probably owe my life, and I feel that I imbibed from you certain sentiments which have greatly assisted me in my naval career – that we could always beat a Frenchman if we fought him long enough; that the difficulty of getting at them was oftentimes more people’s own fancy than from the difficulty of the undertaking; that people did not know what they could do until they tried; and that it was always to err on the right side to fight.”

A century later, another tribute, from the historian John Leyland, has never been bettered:

“Not less by his intrepid courage and fearlessness on many occasions than by his sleepless endurance, extraordinary vigilance, and masterful combinations during the great blockade, he rendered most signal service to his country”