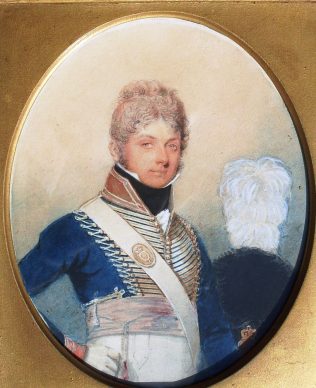 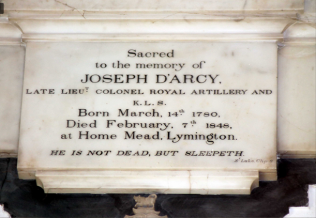 zoom
Courtesy of All Saints Milford

Lt Col Joseph D’Arcy lived in Milford in his later years and is buried at All Saints, Milford.

He lived at Milford House in 1829, once the home of the Reynolds family, but at that time in the ownership of Mrs M A T Whitby of Newlands, moving later to Priestlands in Pennington in about 1834 and then Holme Mead, the site of the current Post Office in Lymington in 1846, where he died.

D’Arcy had an interesting military career, serving in the disastrous West Indies campaign of 1795/6, and was present at Maida (1806), Copenhagen (1807) and Walcheren (1809). He then spent five years reforming the Persian army. In the 1820s he was ADC to the Lord Lieutenant of Ireland, the Marquis of Wellesley (brother of the Duke of Wellington). His portrait shows him in the uniform of a Royal Artillery Officer wearing the Order of the Lion and Sun which had been presented by the Shah of Persia.

There is a plaque (with Latin wording) in the Church, and his memorial (pictured) is inscribed:
“Sacred to the memory of Joseph D’Arcy late Lieut Col Royal Artillery K.L.S. Born March 14th 1780 Died Feb 7th 1848 at Home Mead Lymington. He is not dead but sleepeth.”

For more on Joseph D’Arcy’s family, see The D’Arcy Family.