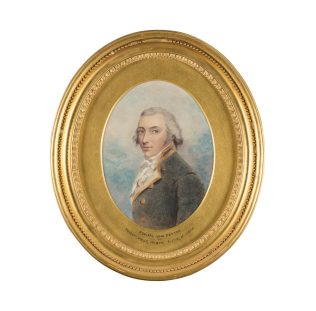 Nelson’s Band of Brothers were the fifteen captains in his fleet at the first of his three famous victories, the Battle of The Nile in August 1798. Twelve went on to have illustrious careers. Two more died – one at the battle and the other at sea a year later. The luckless fifteenth was John Peyton, who was forced to return home through illness, moving to Priestlands in Pennington eighteen months later.

Yet Peyton served Nelson well – which Nelson himself acknowledged – taking the surrender of the French ship Franklin after three hours of fighting.

Two members of the Society have now researched Peyton’s life and career, and the results of that work – the first ever study of Peyton – will be published in a forthcoming Occasional Magazine.

Peyton’s memorial in All Saints Church was restored in 2017 with funds raised by the Society and the 1805 Club.

AS a footnote: The Society’s annual summer outing in 2018 is to Wakehurst Place, the former home of Peyton’s father, Admiral Joseph Peyton.