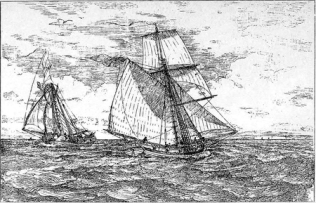 It has been suggested that in 1786 the Battle of Milford Green was fought between smugglers and the Lancashire Militia.

The smugglers are said to have had 14 wagons and 100 armed horsemen, and there were many casualties on both sides. Later, Mr. Bursey the local customs Riding Officer was found murdered on his own doorstep.

There is a newspaper report of an encounter between two companies of the Royal Lancashire Militia and smugglers between Lymington and Christchurch on Sunday 22nd November 1778, one smuggler was killed and one soldier wounded.

Smugglers were thought to be regarded as popular heroes and public benefactors. The only way most people could afford tea, brandy etc was with the help of the smuggler. When duty on these items was imposed, it was said that Free Trade went out of the window, and the smugglers took to calling themselves Free Traders.

Smuggling was big business in this area.  From about 1700 Britain was at war in some part of the world almost constantly.  Wars cost money, so taxes have to be raised, and by 1800 duty was payable on around 2000 items entering the country; practically everything was taxed, and so a huge trade in smuggled goods was carried on all along the coast. Locally, smugglers are said to have operated at Milford, Keyhaven and Hurst Castle.

Smuggling in Hampshire and Dorset 1700 – 1850 by Geoffrey Morley

An Official History of HM Coast Guard by William Webb.