The Ancient Parish of Milford 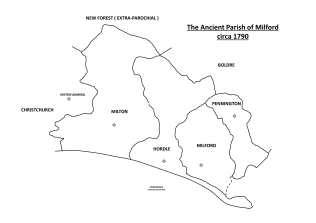 zoom
The extent of the Ancient Parish of Milford
Courtesy of C.J.Sanders

From before the Norman Conquest, ancient parishes existed for ecclesiastical functions, and Vills (townships) and Manors dealt with the secular government matters.

The Ancient Parish was essentially a collection of ancient rights which had become associated with a specific area, often one over which a clergyman had jurisdiction. The Hundred Years War saw a decline in the status of feudal system for civil government but the parish, as an ecclesiastical unit, remained.

As the population of the ancient parish grew the geographical extent of the parish decreased. Milton was separated from Milford in 1791, Pennington in 1839 and Hordle in 1861.