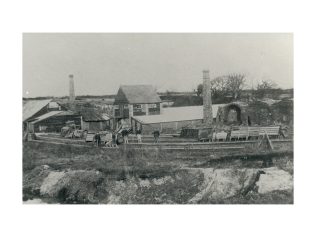 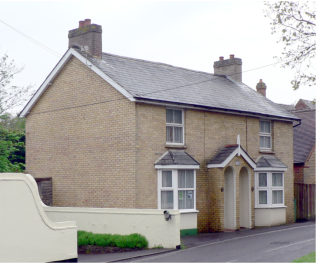 There were once many brickworks in the Lymington and surrounding area, one being Lymore Brick & Tile Works.

The land was owned by the Cornwallis Wests and leased to Richard Tanner in 1892. He paid a rent of £16 a year, plus 1 shilling for every 1000 bricks sold, 1 shilling for every 56 cubic feet of terracotta sold and 6d for each cubic yard of clay, gravel and earthy substance sold.

Brickmaking was largely a seasonal occupation; most of the workforce being laid off between the end of November and the beginning of March. Clay was dug during the autumn and left in heaps to weather. In March, the clay was ‘pugged’ to give it the correct consistency for moulding; stones and debris removed and water added. Sanded brick moulds were filled with pugged clay and any surplus trimmed off with a cheese wire. The green bricks were then stacked in rows on long floors, often of tarred planks, to dry for six weeks before being fired.

The bricks were fired in the kilns which held in the region of 40-50,000 bricks. Once firing was complete (about 4 days) the kiln was left to cool, preferably for a week, but, if demand was high, the bricks would be removed as soon as they could be handled.

Unfortunately, after a time, a stoney material, known as ‘race’, was found making the clay unsuitable for brickmaking and the site was abandoned. Little can now be seen at the site except dips in the ground and a pond which may have been clay pits.