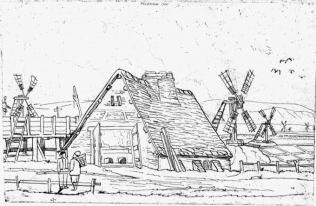 The earliest record of a saltern in Milford occurs in the 12th century.

The number of salterns increased slowly over the next 600 years and the industry became a major local resource and a significant contributor to the Exchequer by way of tax.

The salterns were a valuable asset to the parish as collectively they provided it with a regular, dependable income amounting to 17% of its rate revenue by 1713.  Farmers were becoming increasingly prosperous and started investing in salterns with a resultant expansion of the industry. Entrepreneurs started to buy out the farmers in the 1760s and by the end of that decade there were 15 salterns which by the 1770s were providing 28% of the parish’s rate revenue.

As Sawyer says “In the prosperous days of the 18th century, the shoreline from Hurst shingle spit to Pennington and beyond was one expanse of salterns glistening white in the sunlight and dotted with little pumping windmills and boiling houses.”

From the 1760s the sea started to overwhelm the salterns as floods breached sea defences and Hurst Spit. By 1789, Milford had lost three-quarters of its salt manufacturing capacity. The remaining salterns limped on for a further thirty years and in the early 1820s the derelict salterns were levelled and turned over to grazing.

A.T.Lloyd, The Salterns of the Lymington Area (Private Publication)