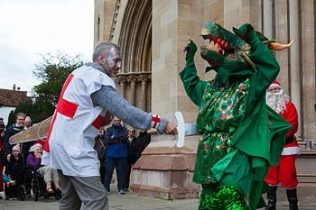 Here is an extract from an article written by Charles Rivett-Carnac for the Occasional Magazine of 1912 drawing on his experiences of Christmas in Milford 50 years before.

“The Mummers of Milford fifty years ago in the days of my boyhood were never complete without the representative of Beelzebub who came on the scene with a blackened and otherwise horrific face; he carried a frying pan which he beat with a stick, and capered about to the mingled terror and delight of us boys. The theatre was the kitchen or servants’ hall, either at Rookcliff, which was my home, or Kivernalls, the home of my uncle and aunt, Dr and Mrs Brown.”

It was traditional for St George to play a role in the proceedings often fighting the dragon or a Turk. Rivett Carnac continues “They paced backwards and forwards while they spoke the lines preliminary to the great encounter, and every time they passed each other their sticks (swords) met with a resounding thwack which added greatly, in my eyes, to the excitement and delight of the entertainment.”

The entertainment concludes with the lines,

“Ladies and gentlemen,
Our story is ended,
Our money box is recommended;
Five or six shillings will not do us harm,
Silver, or copper, or gold if you can.”