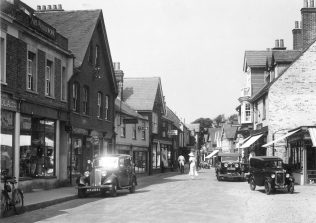 In the middle ages the main modes of transport were on foot, by horse and by cart. A network of footpaths and bridleways would have connected the farmsteads and hamlets in Milford parish.

The horse dominated transport well into the 19th century. During the 18th century there were increasingly sophisticated coaches and carriages linking the main towns. The first mail coach from London to Southampton 1787 taking 10 hours and 5 minutes; the journey from Southampton to Lymington taking a further 2 hours 45 minutes.

Apart from the short-lived Salisbury Southampton Canal the main use of water transport was on rivers and the sea. Keyhaven has long been a fishing and ferry port rather than a cargo port.

In 1840 the London to Southampton railway was completed and by 1847 the Southampton to Dorchester stretch was opened. Finally, in 1859 the Lymington spur was opened. Other schemes, some involving Keyhaven, were considered variously included a tunnel and a bridge to the Isle of Wight.

Steam buses were first seen in Milford in 1905 as part of a route linking Lymington and New Milton stations via Pennington. From the 1880s cycles were increasingly to be seen on the roads. The first motor car recorded locally was in Lymington in 1897. Within the next few years motor cycles appeared.