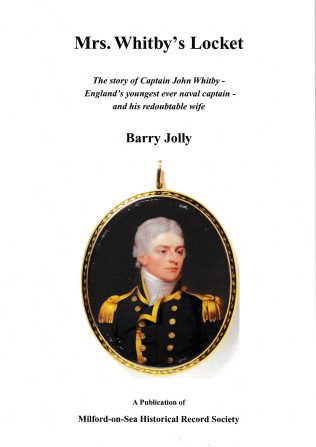 Every now and then, MOSHRS publishes a single volume dedicated to a specific topic of local history.

Mrs Whitby’s Locket tells the story of a naval officer of some two hundred years ago, John Whitby. He is little known, but deserves better. He was promoted to Post Captain at a younger age than Nelson, and received his first command whist still a Midshipman at the age of sixteen years and two months. His rapid promotion was aided in no small measure by an inter-connecting web of contacts and men of influence, not least of whom was Admiral Sir William Cornwallis.

Mrs Whitby married at a young age and within just a few months found herself in charge of rebuilding Cornwallis’ house, Newlands at Milford, Hampshire, and running, and developing, his estate. When he died, he left his entire fortune to her and her daughter.

The permanent link between Captain and Mrs Whitby was Admiral Cornwallis. All three had a hand in the production of an enamelled locket which symbolises the enduring nature of their loyalty and devotion during the wars against the French and which gives this story its name. The locket, having been sold by their great grandson in 1923, now resides in the Victoria and Albert Museum.