You are here: HomenextHistorynextBusinesses and OccupationsnextOccupations in Milford in about1800

Occupations in Milford in about1800 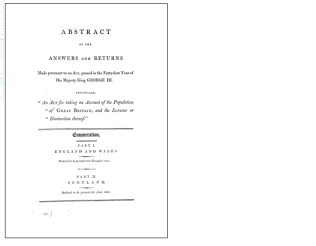 Some modest research has been undertaken to date on population statistics to identify employment and occupation patterns. A snapshot is to be found in the various Census reports dating back to 1801 (see image for the cover page of that report), although the data for that year are to be avoided. In Milford, there is a clear arithmetic error, and for the country as a whole, instructions to the census enumerators resulted in wildly different interpretations, a problem identified in the report itself.

Nonetheless, the 1811 data are more reliable, showing that in Milford as a whole the majority of families (175) were engaged in Agriculture, 57 in Manufacture, Trade and Handicraft, and 20 others. Others included the well to do and the unemployed. However, in the economic depression following the Napoleonic War, the numbers of Others climbed steeply, so that 76 were recorded in 1821. At the same time, the numbers in the first two categories fell, partly commensurately and partly because soldiers and sailors were returning to the labour market.

The numbers appear to be appropriate for a rural economy, with Manufacture, Trade and Handicraft including shopkeepers and rural crafts – smithying, wheelwrights, milling, etc. However, the slightly more detailed data for 1811 show a significantly higher number engaged in Manufacture, etc in Pennington, possibly because of the proximity to the salterns.

Problems of definition, changing parish boundaries, and limited corroborative data present considerable difficulties in determining meaningful comparisons between periods, but there is substantial scope for investigation into an important area of Milford’s social history.