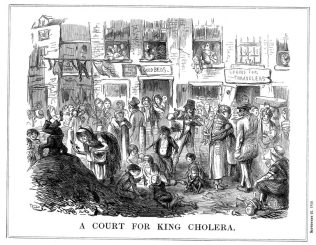 The Act also made towns appoint Health and Sanitary Inspectors and a Medical Officer of Health. In the years after 1875, local councils also became responsible for checking the quality of food in shops, ensuring that the quality of new housing was improved, enforcing a new law against polluting water supplies such as rivers and streams.

The public health act of 1875 was the umbrella act that drew all laws relating to sanitation, disease prevention and public health under the full control of the government. The Act was more successful than its predecessors as no-one had the power to oppose the councils.

In 1892, there was an outbreak of typhoid fever in Milford. At the time a local clergyman, Rev R.B.Matson B.A. wrote to the Local Government Board complaining and citing the report, published 3rd March 1892 of the Medical Officer of the Rural Sanitary Authority calling the attention of the Authority to the unsanitary state of the vault closets of the National School.

The Medical Officer had examined the water from a farm and found it impure. The farm also had a water closet with pipes out of order, “there must be in consequence a constant return of sewer gas into that part of the house.” The Medical Officer also called attention to the insanitary state of the ditch near the White Horse caused by an overflow from an old cesspool. Colonel Cornwallis West chose to dispute these findings. It may be that the remedy to make good repairs would have fallen to his purse.