You are here: HomenextHistorynextHealthcarenextThe Cottage Hospital 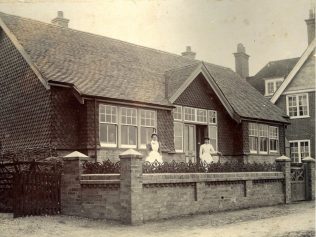 In the Nineteenth Century the nearest general hospitals to Milford were in Winchester and Salisbury. To get treatment you had to be, or be sponsored by, a subscriber. In the 1880’s, Milford supported Hospital Sunday which was set aside annually for collection of money for hospitals.

Dr.Bruce asked William Agar of Milford House for a hospital and this great benefactor of the village agreed to have one built on his land along Keyhaven Road. It was opened in 1900, and the Hospital Sunday funds were henceforth channelled there.

The Cottage Hospital was given its new designation as a War Memorial in October 1919 and at the same time the freehold was purchased. There were severe “deficiencies of accommodation” but no space to expand and the road was increasingly noisy and dusty.

On 7th May 1930 a newly built War Memorial Hospital was opened on Sea Road. The hospital had its own operating theatre and was the scene of continual expansion and re-development..

During both World Wars other buildings in Milford were commandeered and converted into hospitals and convalescent homes, including Gorse Cliff, and the White House,.