You are here: HomenextHistorynextHealthcarenextThe Poor House 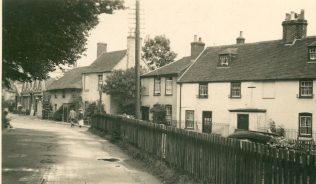 Overseers of every parish could raise what money they needed by local taxation. With this they provided materials to the poor to allow them to work and support themselves. The overseers also organised apprenticeships for children, relief for people with disabilities, and the erection of poorhouses for the aged and infirm.

The earliest surviving local Overseers’ Accounts (1791) point to a long-established poorhouse in Milford. Its final location was near the bridge over the Danes Stream at the western end of the village in today’s Bay Trees together with adjacent thatched cottages. It had to be rebuilt in 1825 following storm damage.

The Poor Law Amendment Act of 1834 centralised relief of the poor nationwide and allowed parishes to group as Unions for economies of administration and Milford joined with neighbouring parishes to form a Union Workhouse at Lymington. The former poorhouse property was sold to Mrs. Whitby in 1836.

Dr. V. D. Harris   “Poorhouses in England with special reference to Milford Poorhouse and the Relief of the Poor in the Parish”. MOSHRS Occasional Magazine Vol.3 No.5 (June 1926) pp.3-31.